These mountains can be less busy than the slopes on the Avoriaz and Swiss side. Hence, beginners and intermediates will find more room to get their confidence up before heading for the more challenging areas of Portes du Soleil.

Heading toward Les Gets, the area between the Ranfoilly and Rosta peaks is good for those starting to venture off piste. You can spot the interesting areas from the chairlift ride up, as it's all close to the marked runs. Head to the Chamossiere bowl for some good, more challenging off-piste. On the way there, you can also find one or two nice lines through the trees around the Troncs and Tetes chairs. More advanced riders may find they need to head up to the slopes above Avoriaz.

With Morzine's altitude being relatively low, rain can sometimes fall in the town. Don't let this automatically keep you off the hill; rain in the town can be snow on the top, so while others spend the day drinking you can be getting fresh lines. The pint afterwards will taste much better if you've been riding pow! What's more, Morzine has plenty of tree-lined slopes that help when visibility is low.

Morzine has it's own snowpark in the Nyon area, you'll see it on the piste map. It's nothing to write home about though, beginner level jumps and a rail or two, although it does have it's own button lift, which is a plus. Check it out if you're in the area, but if not, try the park in Les Gets or head over to Avoriaz, both destinations are better.

The Chapelle park in Avoriaz is a great place for progression, it's constantly maintained, they mix it up, and it's only three lifts from Morzine's centre, via the Super Morzine lift. There's always a row of 5-7m kickers, as well as beginner kickers, rails, boxes and two drag lifts, making it ideal for getting lots of runs in. Also, from the top of that park you can ride down to the Stash.

The pistes in Morzine are fairly plain, no abundance of natural hits.

The pistes are well maintained although a little dull. Fine for beginners and intermediates, but advanced riders will soon be looking outside of the immediate Morzine area. If you're new to the area, scope out the piste map, maybe ask around, but generally have a plan. It's a big area with lots of runs, lots of lifts and you can waste time trying to get places.

Try the red from the top of Chamossiere, it's fast, steep and long. If you're in this area, look for Chamois, another red that brings you back to the Pleney base. It cuts through the trees and is great for opening it up with space for good wide turns. Two notes, stay left, otherwise you'll end up in the Nyon car park, and the blue run that it leads onto, Retour des Nanta, is narrow and can get quite congested at times. 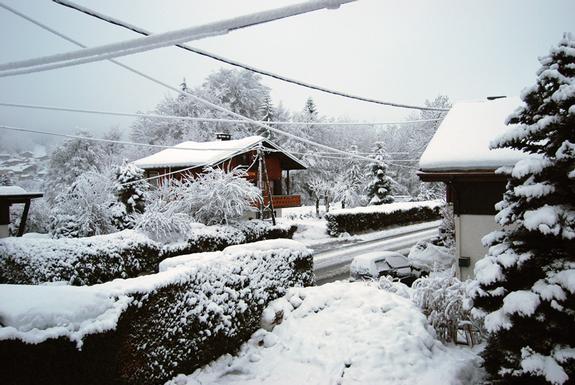 There's a decent range of runs in the "bowl" area of Morzine/Les Gets, accessed by the Ranfoilly Express and Rosta lifts.

If you are riding in Avoriaz, come back via the home run from Avoriaz down to Prodains: Crot. It's a long, twisting run with varied pitches, a few natural hits and a steep section at the end. A great finish to the day, with a beer waiting at the bottom if you want it. As the lifts are closing it's normally taped off, so with most people opting for the cable car down, you can have the run to yourself. The bus back to Morzine is simple; the alternative, the Super Morzine, is less interesting, has some flat bits and involves two lift.

Beginners will be glad to hear that it's mainly chairlifts on these slopes, so the dreaded poma or t-bars don't have to be tackled. The top of the Pleney is a good place to start, it's also the base of the majority of lessons. Although there aren't many good green runs, there are some easy blues and reds on which the beginner can progress. Note that the Pleney slope itself, which heads back to the town, is a steep red.

Don't neglect the Super Morzine area, if your pass covers this, for some good beginner blues. Zore, under the Zore chair is excellent for progressing and often very quiet as this is predominantly an access route to Avoriaz. It's a nice wide, flat blue; great for an intermediate looking to perfect their turns, or a beginner looking to progress, with one of steep bits to keep them honest.

If you're looking to have lessons, consider Mint Snowboard School. They're a small team of British snowboard instructors who continue to receive good feedback, perhaps less hit and miss than ESF.