SkiWelt Brixen im Thale is upgrading. From the next winter season, the new Jochbahn, the fastest chairlift in the world, will start operating on the Brixner Sonnseite (“Sunny Side”).

Detachable, comfortable and unbelievably fast: at a speed of 6 metres per second (previously 2.4), the new Jochbahn will be transporting 3,000 passengers per hour, offering not only more speed and comfort, but also doubling the skiing pleasure just as before. Opening in time for the 2015/16 winter season.
The Jochbahn deploys not just the very latest technology, but the route has been extended too.  The new valley station is situated at the same level as Gasthof Nieding, so the lift is now more than double its previous length. But courtesy of this new technology, the journey time is considerably less compared to the old lift. The old Holzalm drag lift has had to be dismantled to make space for the new construction and the new piste. The new lift track was built without any earth movements and land clearances and the existing slopes were harmoniously integrated into the Jochbahn’s new downhill run. Skiers above – cars below. Thanks to a spectacular underpass near Gasthof Nieding, the piste now crosses over the access road so no junction and that’s a great safety feature for the popular Brixen valley descent.
The lift itself is a veritable gem and forms one of the most modern systems in the entire SkiWelt. All 75 chairs on the two-kilometer Jochbahn are equipped with comfort suspension, heated seats and weather protection hoods. The new lift is not only the fastest of its kind anywhere in the world, but it is also a system that in terms of comfort performs in the top league. There's a solar panel farm covering 180 sq.m (on the south side of the chair garage) and this has an important role in ensuring that the energy supply for new lift is sustainable
With the construction of the extended Joch lift and the new Joch descent, which has already opened for this winter, Brixen now has a very attractive, varied, sunny and snow-assured (constantly machine snowed) piste paradise, which appeals not just to families and beginners, but also to dedicated skiers.
The main construction work on the Jochbahn will take place in the summer of 2015, so that by the start of the 2015/16 winter season it will be ready for all winter sports enthusiasts. Brixen im Thale is investing in total around 12 million euros in this project. 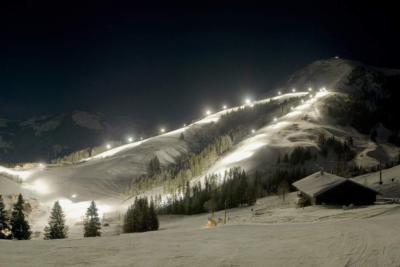