Zermatt is an extremely good resort with some excellent freering terrain set in an incredible location. Nightlife is decent but you need to bring yours and someone elses wallet with you. 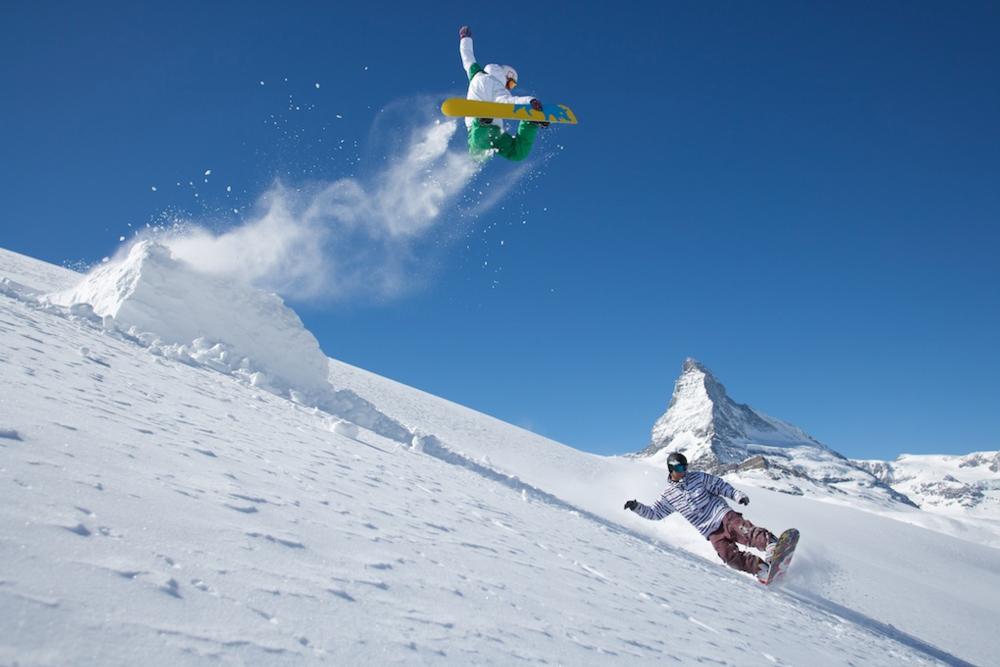 There are 38km of official freeride routes, and off-piste is where Zermatt really excels as a destination. The Stockhorn or over at the Schwarzsee areas are good. There’s lots of bowls, couloirs and steep off-piste and if you’ve got any cash left then heli-boarding is an option.

There are heli options to Alphubeljoch, Äschhorn and Monte Rosa and a 4hr trip costs 380CHF, if you don’t have that sort of cash then 185CHF will get you on a freeride day to some less trodden locations. Contact the Zermatt Alpin Center for details www.alpincenter-zermatt.ch tel: +41 (0)27 966 24 60

The park in the winter moves to Furggsattel up on the glacier and is served by the 6-person chair. Things get mixed around but generally there’s around15 features with 2 separate rail and kicker lines along similar lines to the summer setup with the halfpipe alongside it. There’s a couple of learner mini-parks on the Sunnegga and Riffelberg peaks, these even have magic carpets to save you hiking up. The park in Cervinia is more impressive and impeccably shapped but minus the halfpipe.

The area can be split up into 3 main areas; the Rothorn accessed by the funicular in the village, the Gornergrat accessed from the funicular next to the train station, and the Matterhorn paradise accessed via the gondola at the far end of the village.

The Rothorn/Sunegga area provides a few intermediate runs but the beginner run down to Sunnegga isn’t the best for newbies with one pretty steep section that you need to take with a bit of pace to avoid any skating. The reds from Rothorn and Blauherd down to the Patrullarve chair are littered with small little drops just off-piste but the pistes soon end up as cat track. The black run directly under the chair is probably the steepest in the resort and provides a good adrenalin hit.

You can board back into the village from this lift but again it’s a narrow cat-track, and only the opportunity to spray the champagne quaffing toffs at the tiny champagne bar on the slopes provides excitement.

Freeriders should head from the Blauherd over to the cable-car at Hohtälli. The Stockhorn has a number of official ski-routes back down to the cable-car but there are plenty of other options.

Gornergrat without a shadow of doubt provides the best terrain for beginners. Boarding down from the Gornergrat to the village you can either follow the funicular down to Riffelap or take the red 29/27 in which case you’ll have to walk 10mins from the station to rejoin the piste. Further down from Riffelap keep an eye out for the piste otherwise you’ll end up on the walking track all the way back down.

The Matterhorn paradise is the main draw accessed for the gondola in the village. Either jump off at the mid section to head up to the glacier or continue to the Schwarzsee Paradise which has a number of great freeride-routes that lead back to the gondola.

The ride on the cable-car up to the peak at 3883m is stunning and has great views as it crosses a glacier. From the top there’s a walk up to the peak for a great 360degree panorama. There’s a cool new restaurant at the top that does nice asian food, but more importantly is entirely self-sufficient, creating its own power and converting all waste. There’s a long narrow, but not steep red run that connects you to the glacier. This area is all served by t-bars but if you want to head over to Cervinia or just straight down, then you don’t have to touch them. This is the area open in the summer complete with a decent park and pipe, in the winter the park is rebuilt further down under the chairlift to Furggsattel. Being a glacier you really need to be careful off-piste with snow-covered crevasses abound, but the majority of the glacier is flat as a pancake anyway so you won’t have the speed to get into too much trouble.

Run 67/70 that starts from Furggsattel down to Furgg is probably the best wide run in the resort, steep enough that you can get some descent speed but not too intimidating for anyone.

Zermatt is not really the best place to be taking your first steps. There are limited beginner runs and lots of narrow cat tracks connecting areas, you won’t find too many flat bits but it’s not as snowboard friendly as it is ski friendly. Beginners can get a Wolli-Skipass which only covers a tiny area on the Sunnegga, but at half the normal lift pass price its fine for your first few days.

Gornergrat without a shadow of doubt provides the best terrain for beginners. The funicular runs every 30mins or so and you can do laps down to Riffelberg all day without setting foot onto a chair or drag lift. The pitch of the blues here are near to perfect, the slopes are pretty wide and there are no flat or steep sections.

The piste-map can be pretty deceiving at crucial points if you are a beginner/intermediate. Boarding down to the village from Furgg it looks like you can take a red straight down, but you’ll need to take the chair/cable-car to Schwarzsee paradise first; get this wrong at the end of the day, and you are faced with a steep narrow moguled cat track, full of packs of snow-ploughers before you can convalesce over a beer at the Hennu Stall.

To cut down of people speeding past beginners, Zermatt along with a number of other resorts have introduced chill-out zones. The one on the Gornergrat and others are sure to follow.