It's not cheap, but it is year-round snow with good instructors and good freestyle options. 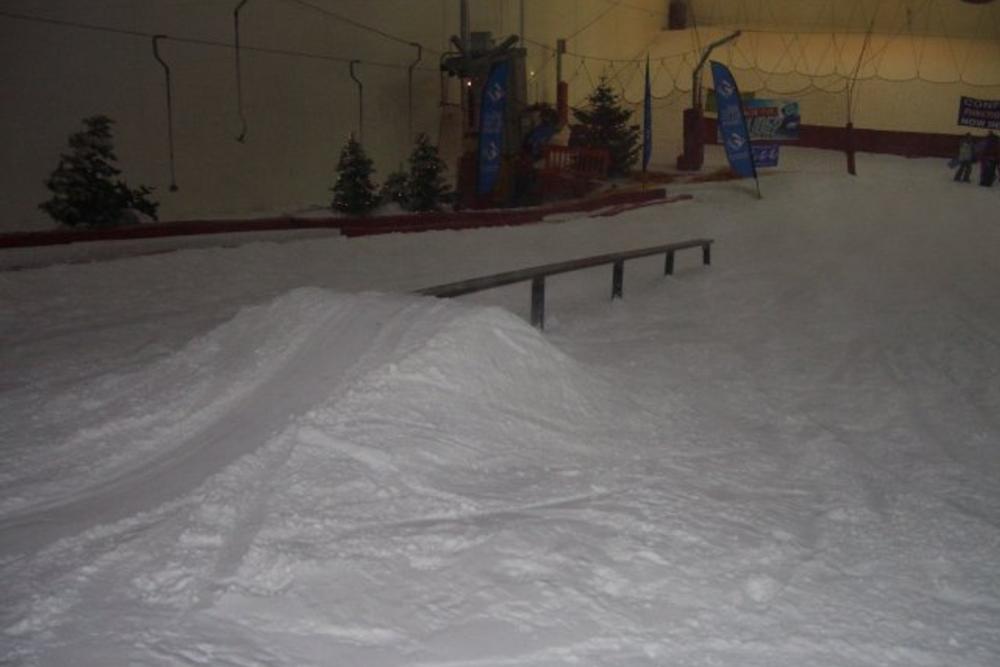 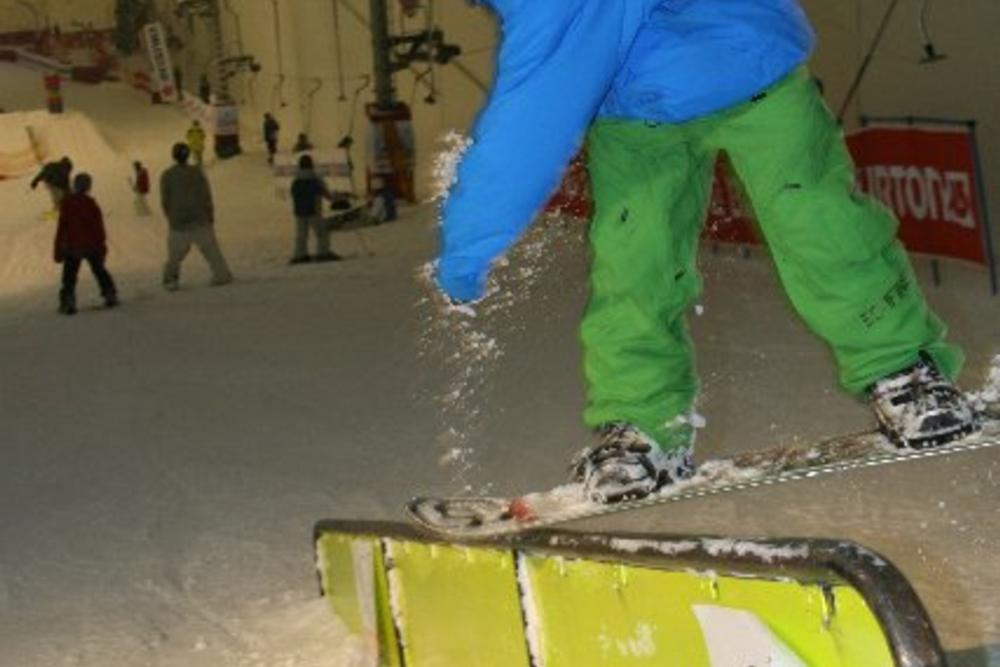 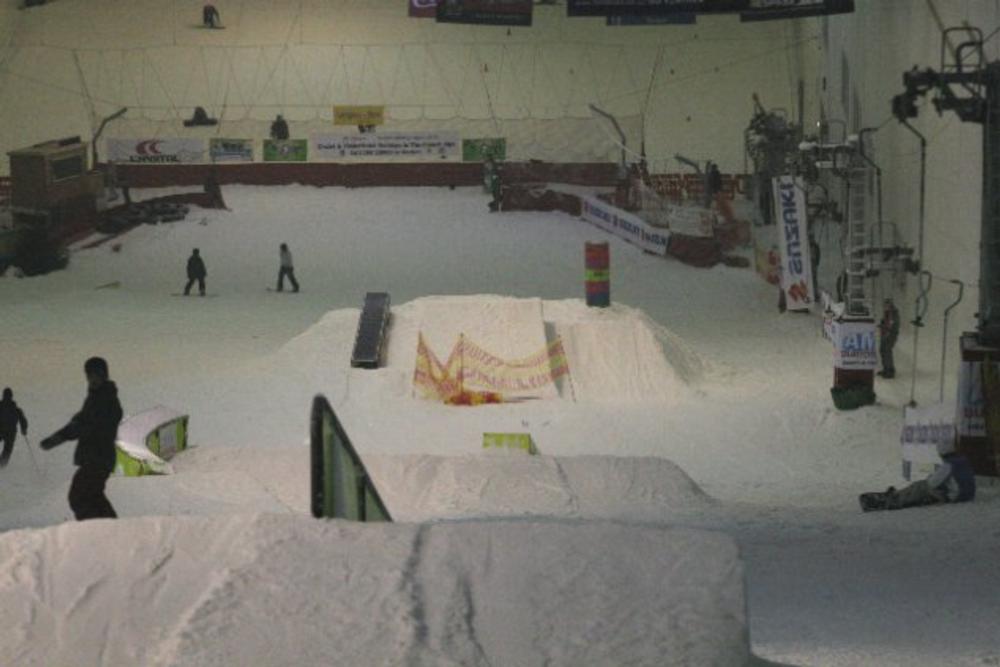 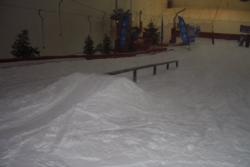 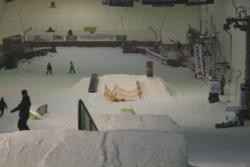 Castleford, Leeds, is one of the three XScape snowdomes, the other two being Milton Keynes and Braehead. Indoor snow slopes are a popular place to learn and Castleford is no exception. Like the other snowdomes around the country, Castleford also has a thriving freestyle community. The main slope is only 150m long and 35m wide, which, although enough for beginners and jibbers, won't satisfy the freeriders out there.

Beginners
For many people, the prospect of learning on snow, albeit artificial snow, is much nicer than that of a dryslope. Castleford has a 40m, dedicated beginners run, although that stat might not stand up under the tape measure. There's a rope tow at each side providing easy ascent, even for the novice snowboarder. The instructors at Castleford are very good, and the main slope provides a good progression path to your first linked turns. Equipment hire is included in the cost of lessons, as is the use of a helmet, which is required when learning. If you don't have suitable clothing, you can hire what's needed: waterproof jacket and pants will cost you £5. Gloves and socks are not available for hire and you don't need goggles.

Learning on an indoor snow slope comes at a premium. A single hour's lesson at Castleford costs £27, a fast track 3 hour lesson £72, and a learn to board in a day a whopping £150. The average time to meet the recreational standard is between 4 and 8 hours, so do the math. All of the information, including the minimum standard for the main slope, can be found on the XScape Castleford site. Despite the relative expense when compared with dryslopes, many would argue that the feel of snow makes it worth it.

Freestyle
Indoor slopes offer a year-round solution for those seeking a freestyle fix, with weekly, dedicated sessions. Castleford's freestyle nights are Thursdays and Fridays and it's at these times that they build a park with rails, boxes, jumps and jibs. Due to indoor space restrictions and the physical difficulties of getting enough snow together to build and shape kickers, you'll find that the park design is often geared towards boxes and rails. Checking the setup beforehand is a good idea; use either the SCUK site or the XScape site. Note you also need a helmet, which are freely available.

As well as the obvious benefit of providing a park, the freestyle nights also offer the best value at Castleford. A four hour freestyle session costs £35 compared with the peak, hourly rate of £21 for an adult.

Operating in parallel with the weekly freestyle sessions are the weekly SNO!academy coaching sessions. The coaches are very good and will cover all levels of freestyle. The two hour session costs £30 with the option of riding for an additional two hours for £10.

Castleford, along with the other XScape slopes, also build bigger parks, which represent the pinacle of UK indoor freestyle, on an occasional basis throughout the year. The SNO!storm park night that cycles through Castleford roughly every three months, consistently produces a good setup. As well as additional and more advanced rails/boxes, these parks also provide decent kickers. With an extra hour thrown in for free, a rookie park and on-tap coaching, it's definitely worth going. There are also airbag nights during the summer months.

Intermediates and Freeriders
Whilst not suitable for the hardened freerider, Castleford's indoor slope does provide a useful means of dusting off the cobwebs for the developing, annual snowboarder. As long as you can use a button lift, control your speed and link your turns, you can use Castleford's slope to refresh yourself of everything you learned the year before.

Resort
Resort is a bit of a stretch, but there are other features of interest beside the slope at XScape worth mentioning. Regulars hang out and meet up at Rockies SNO!bar which has views of the slope. As you might expect, there are a handful of winter sport shops, including TSA/Ellis Brigham and Subvert. Combined, they provide a good selection. TSA provides a try-before-you-buy service as well as snowboard maintanance. Also look for specific board demo nights on the slope. If you're using the slope you've got access to a changing area, showers and lockers. Finally, you'll also find a skatepark at Castleford.

Summary
It's not cheap, but it is year-round snow with good instructors and good freestyle options.

Other nearby indoor slopes

Summary
They have achieved so much so early on e.g freestyle...
Indoor 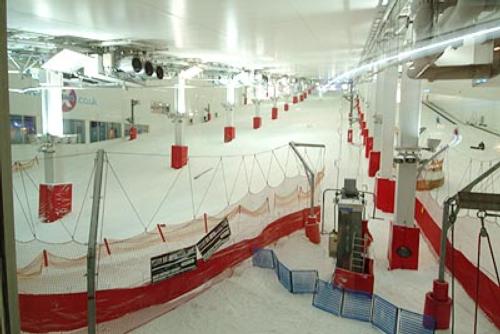 Summary
Great for a freestyle fix but very expensive
Indoor

Summary
Slightly shabby but the cheapest and most friendly indoor slope...