A must visit, as much for the traditional town as for the mountain which offers a lot for everyone 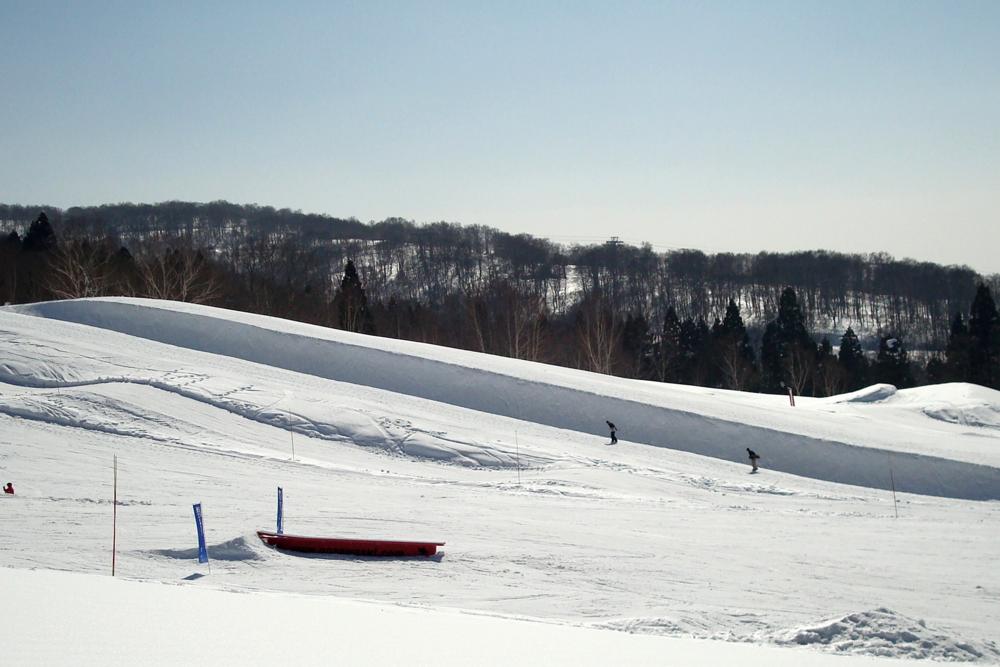 On a powder day, head straight up to the top of the mountain to the Yamabiko area. The area directly under the chairlift is one of the only places in the resort where you are allowed to ride in the trees, so make the most of it. As you’ll see from the chairlift there’s a wide bowl interspersed with birch trees leading into a valley. Away from this area all the wooded areas are out of bounds, so you’ll be taking it in your own hands if you venture into this glorious steep, sometimes thick woodland.

The resort have spent a deal of time building a nice park, and overnight and lunchtime maintenance ensures its always in good condition. There really are two terrain parks and a number of beginner rollers linking them and turning it into a great 2km freestyle run. The park is located on the Uenotaira plateau and served by a fast 6-person chair.

From the top of the chair on the Uenotaira piste are a series of 8-10 rollers, the first park then splits off to the right, while continuing on the piste you’ll encounter a few more nice beginner rollers. The first park is aimed towards the progressing beginner freestyler and has 2 small table-top kickers and a few rails. There’s also a separate area where they have a monster 30m straight rail.

Veer off to the left after the park to head towards the halfpipe or another few rollers time you’ll come to the second park. This is more advanced and consists of a line of two 3m table-top kickers and then a series of 3-4 easy rails.

The halfpipe is located towards the bottom of the Uenotaira piste on the other side to the terrain park and next to the restaurant. Shaped daily, the resort keep it in good condition but the walls get too soft by mid afternoon, so hit it early.

The resort has a high number of quite steep and very steep slopes, and some quality beginner areas, however those who have recently progressed from the beginner slopes will need to raise their game to really enjoy the mountain.

Most of the black runs, such as Schneider, Hikage Drop and Kurokura have sections which the resort calls Fresh Snow Areas, which means they are left un-pisted and quickly develop into mogul fields. A lot of care and attention goes into the piste bashing for the rest of the resort.

The Kandahar black runs are used mainly for competitions and are still only occasionally open for the public to use; skiers that is, snowboarders will still have to admire from a distance.

Skyline which runs along one of the spines gets progressively narrower and undulating but is a good adrenaline kick for a while. The black runs that drop into the Nagasaka area are steep and left un-pisted.

Beginners have a resort very suited to learning on. The base areas such as Hikage, Nagasaka and Karasawa all have good wide learner slopes with a perfect gradient. When ready to try the gondola head up to Uenotaira and try the 2km beginner run. Despite it being in the same location as the park, the run doesn’t get overcrowded and intimidating. There is a 8km beginner run all the way back down to the village from the top of the Nagasaka gondola.