Heavy snow hits the Alps and US

Up to 60cm (two feet) of new snow in the Alps. Laax and Kitzbuhel opening early this weekend – the latter first non-glacier resort in Alps to do so. More than foot of snow in the Colorado Rockies. 36 Ski areas in 9 countries expected to be open this weekend. First snow of the season in the Pyrenees. Turoa still open in New Zealand.

www.skiinfo.co.uk reports that heavy snow in Western North America, The Alps, The dolomites, The Pyrenees and in Scandinavia is making the start of winter 2010-11 look very promising in most areas at present, with more resorts opening on both sides of the Atlantic and a dozen more due to open this weekend.

There have been heavy snowfalls in the Alps over the past few days with accumulations of up to 60cm (two feet) reported, with 90cm (three feet) in the dolomites – although ski areas there are yet to open. 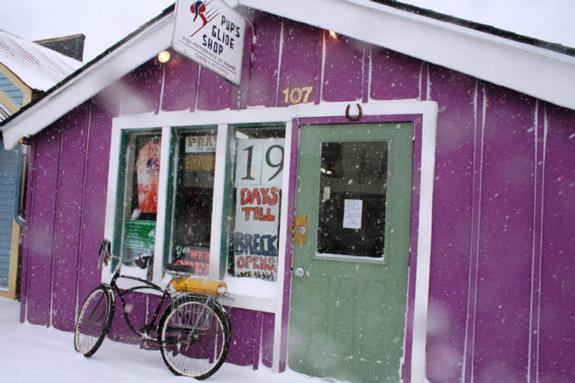 Kitzbuhel and Laax have announced they will open at the weekend, which along with resorts opening in Scandinavia means more than 30 places will be open in six countries in Europe on Saturday.

Around 19 glacier ski areas are currently open to enjoy it all in the four main Alpine nations, although the extreme winter weathers has led to temporary closures of some areas so it is of course important to check ahead before you arrive.

In Italy Bormio – which isn’t open yet – reported the biggest falls with a 60cm accumulation over the past week.  The Presena Glacier above Passo Tonale has opened however joining Val Senales and Passo Stelvio, which is currently reporting the world’s deepest snow base with 200cm lying, to give three choices in the country.  But Stelvio is due to close on Monday, 1st November.  But there’ll be a fourth option from  Saturday when Cervinia opens for the season.

Austria continues to have the most skiing available at the moment with eight glacier ski areas open.

Kitzbühel is going to open the first ski runs on Saturday, when they start into the winter season – the first non-glacier ski area in the Alps to open. A snow depth of 30cm (a foot) is reported.

The Dachstein Glacier has finally re-opened after being unexpectedly closed due to lack of snow for two months.  It has had 20cm of fresh snow and now has a 40cm base.

““It’s a good feeling to stand up here at 1906 metres of altitude on October 23rd and the first guests are already skiing behind us”, says Ernst Trummer of the local mountain railways.

Solden, which hosted the opening outdoor World Cup events in the Northern Hemisphere last weekend also has lots of snow, but the Hintertux glacier currently has more slopes open than anywhere with 44km of runs, a 600m vertical and a 1.55m (five foot) base with 40cm of that fresh powder.

The Mölltal glacier accumulated another 30 cm of snow on Sunday and Monday, bringing the resort’s snow depth to 140 cm. The skiing conditions are reported to be very good. Ischgl and Galtür (not yet open) also had 20 cm of new snow on Monday.

You can also ski or board on the Kitzsteinhorn glacier above Kaprun, at Pitztal, on the Stubai near Innsbruck or at Kaunertal.

Switzerland will have six glaciers open this weekend at Diabelerets, Diavolezza near St Moritz, Engelberg, Laax, Zermatt and Saas Fee – the next stop on the World Cup circuit.

Gstaad – Glacier 3000 got fresh snow on Monday and reports it has up to 70 cm of snow on its slopes now. The Swiss winter resort wants to start its winter season on Saturday, opening at least the skilift “Dôme” and the snow park. Also on Monday, St Moritz got 30 cm of fresh powder. The resort has a snow cover of half a metre now, with two lifts running at the Diavolezza.

In Engelberg that reported snowfall on Monday, too, the snow is about a metre deep at the moment. Saas Fee reported some new snow only yesterday. Five of their slopes are open, the maximum snow cover amounts to 141 cm. Zermatt says to have 173 cm of snow and good skiing conditions on 23 km of slopes.

The Vorab glacier at Laax will be open earlier than expected thanks to the heavy snow - this Saturday, 30  October .  Slopes have been groomed and the rails and boxes in the snowpark are ready for some jibbing!

In France, Les 2 Alpes is open this week only, joining Tignes, before it re-closes for three weeks then re-opens for the winter.

The number of ski areas open in Scandinavia will be in double figures by the weekend.

They will be joined by Kvitfjell, Trysil, Uvdal, Gaustablikk, Rauland, Haukelifjell and Skeikampen all in Norway which all expect to open this weekend, with Beitostølen, Geilo, Hemsedal , Nesbyen, and Tyin-Filefjell following a week later. 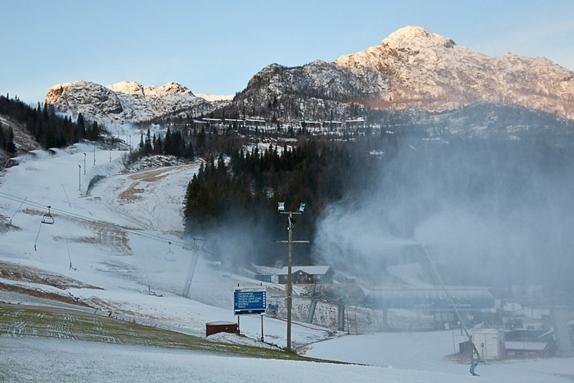 “Temperatures are below zero at the moment, and the snow production is in full swing, so right now, it looks like the weekend openings will go as planned.” said Skiinfo Norway’s Tobias Flatin.

There’s been snow across the Pyrenees too although no resorts are open there yet.  Formigal reported receiving the first snowfall of the season at all the altitudes of the resort, even at the base, at 1,500m metres, and the snow is very abundant in higher valleys.

“This early snowfall is very beneficent, as it cools and moistens the ground.  As a result, the future layers of snow are going to be more solid and will last the whole winter season.” Said spokesperson Conchita Fernandez.

In North America Sunday River in Maine was the first resort to open, last Friday, joining the year-round skiing at Mt Hood in Oregon.  Subsequently Loveland opened on Sunday and Arapahoe Bain on Monday – so there are now four centres open in the US.

Keystone and Copper Mountain, the latter already open for race training camps only, are scheduled to join them on November 5th. 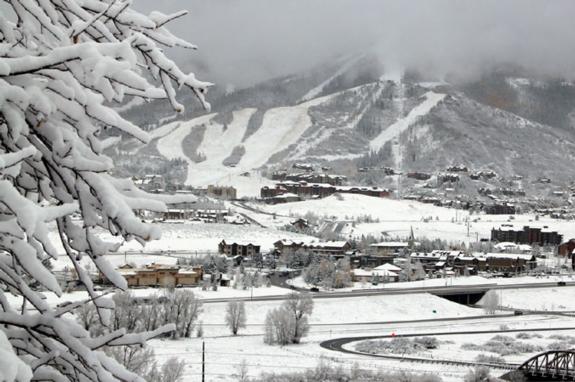 Most ski areas in Colorado, open or not, have had at least 30cm (a foot) of new snow this week.  At Steamboat  14.5 inches (36cm) of snow fell at Thunderhead, the resort’s mid-mountain location at 9,080 feet, which opens November 24th.

“Mother Nature showed just how fast she can go from fall to full winter and reminded all of us that it’s never too early to make sure your equipment is waxed up, season passes are in hand and you’re getting into shape for a fantastic season,” said Rob Perlman, senior vice president of marketing & sales for Steamboat.

“Meteorologists are calling for a La Niña weather cycle this winter, which bodes very well for Steamboat,” said Doug Allen, vice president of mountain operations for Steamboat. “The last La Niña took place during the winter of 2007/08, when the Steamboat Ski Area recorded 489 inches of snow at mid-mountain before it was all said and done.”

Elsewhere in the state, snow continues to accumulate through Summit County and the Vail Valley. Monday’s storm dumped more than 18 inches of snow at Keystone Resort’s North Peak.  Weather forecasts are predicting the snow to continue as temperatures dip into the low teens Fahrenheit.

In California Squaw Valley USA received the first snowfall of the 2010-11 winter season with 2-4 inches  of snow, the result of a low pressure system moving east across California and Nevada from the Pacific coast.

North of the border Whistler has reported a big pre-season snowfall.  A heavy Pacific storm hit the resort at the start of the week, dropping between 25-30cm of snow at higher elevations. The freezing level is expected to remain steady with more periods of snow forecast for this week. 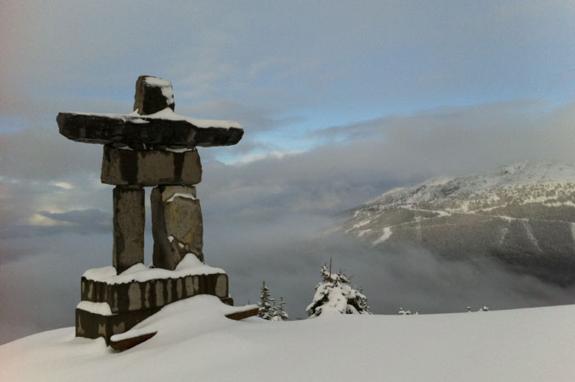 Meteorologists are calling for a La Niña weather cycle for the Pacific Northwest, meaning cooler temperatures and more snow than Whistler Blackcomb’s annual average of 34 feet/10.25m.

Nakiska, which had hoped to open early on October 30th, is now looking at a November 6th opening, however there have been no reports so far that Mt Norquay has any plans to delay its opening on October 30th – this Saturday.

All ski areas in the southern hemisphere are now closed EXCEPT Turoa in New Zealand which plans to stay open another two weeks in to November.  It has more than a 1.5m (five foot base) so looks good to make it. 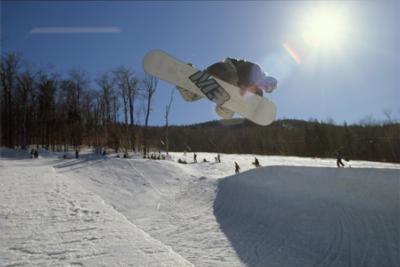 This is a place that offers some great all round freeriding to suit all levels. There is some excellent treeriding to be had and good beginner areas. 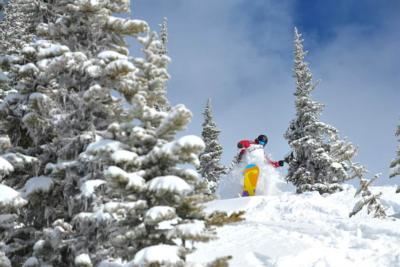 Major riding for all styles and all levels, especially backcountry and amazing park and pipes.But take note: lift queues can be very long, especially at Easter and Christmas. Avoid major holidays if an option and Sundays are quieter than Saturdays, especially on Blackcomb. Great summer riding on Blackcomb Glacier. 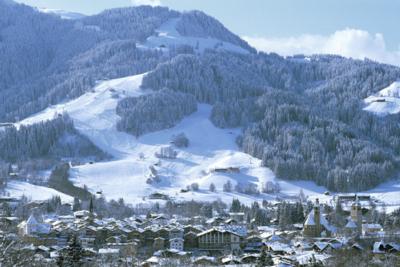 Okay but a bit poncy 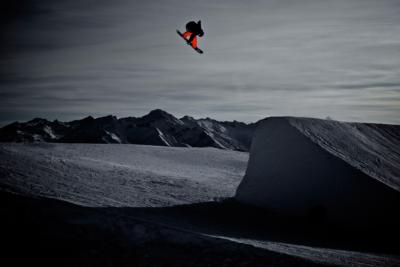