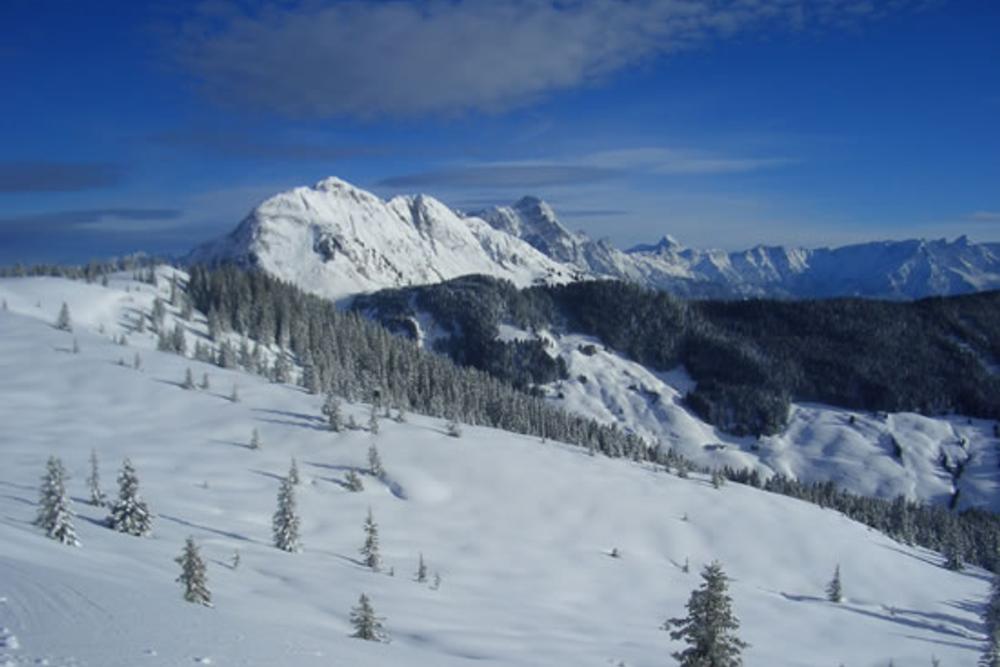 The layout of the lifts and mountains ensures that theres a huge amount of accessible off-piste, albeit between pistes, and not too steep and taxing. There's a couple of nice small runs down to the bottom of the WetterKreuz lift from the top of the Reiterkogel and Bernkogel peaks, you'll need to duck under the ropes so watch yourself.

Towards Leogang the area under the Polten lift is always good fun with a mixture of trees and dips that can be taken at speed.

A good long backcountry run can be found from the top of the Bernkogel (after the long t-bar), as you lead the t-bar head right and hike to the peak for the niceest area. It starts off very open and then you head into the trees ending up at the Spielberghaus which is the start of the toboggen run. Get a local to show you the route before heading off there though.

There are two terrain parks; one in Hinterglemm the other in Leogang.

The Hinterglemm park has been expanded greatly and is served by its own t-bar and is geared more towards the airhead, jibbers are better off heading over to Leogang. There are 3 different kicker lines, each one featuring 3-4 jumps. None of the lines are aimed at beginners and you'll need to be a good intermediate to start getting the most out of it.

The Nitro park at Leogang is a jibbers paradise, and is packed full of every type of rail imaginable and then some. There's always at least 15 different features and a few easy boxes at the top for the more beginners. The park is very cramped with so much packed in but good for hiking back up and hitting it again. There's a small chill-out area, so you can go and congratulate park builder and Austrian pro boarder-x competitor Mario Fuchs on a fine job. Alongside the jib park is a kicker line featuring 2-3 jumps with a large and smaller launch.

Beginners are not well catered for anymore in these parks so they've just built a few small jumps and boxes next to the Hinterhagalm t-bar in Saalbach.

Away from the parks you'll find a good number of lumps you can throw yourself off, but there's not much in the way of cliff drops.

Riders of all grades will do well here - the place is a carver's dream. Those at advanced level who want a testing black run, should take the Schattberg cable car, from where you'll find what you're looking for. Those less adventurous carvers will find the red run named Limberg-Jausern, a nice long treat.

A good day trip is to do the ski circus, you'll see the route on the back of the piste map but basically its heading clockwise and taking in all 3 areas and ending up back where you started in a bit loop. You'll need to get your skates on but its a great way to build up a good thirst for later.

Beginners will find things pretty much perfect. The blue run under the Berkogel Sesselbahn gets busy but is rarely moguled even at the end of the day. The area from the top of the Kohlmaiskopf back down into Saalbach is huge and open and great for progressing. The blue down from the Schattberg to Vorderglemm can be a little narrow at times but it meanders for 7km and its gradual pitch shouldn’t present any problems. You will also find this an easier way to reach Leogang. The beginner’s areas at the bottom of Hinterglemm and in Saalbach can get very icy, so it’s recommended to get higher up the mountain as none of the slopes are too intimidating to tackle.