Being a quiet place, the fresh snow hangs around that little bit longer in Torgon. For an intermediate rider looking to venture away from the pistes without going too far, there are some sections that will be interesting, but nothing epic. There's an easily accessible decent under the Grands Places chair, for example. Those who know what they're doing may get bored quickly. If you want to explore more, you can try the Torgon snow school: 079 314 80 08 or [email protected]

Torgon has an un-groomed, but controlled, freeride area under the Tronchey chairlift. It's a similar setup to the 'Snow Cross' areas found in Avoriaz. It's an advanced run: steep, narrow in places, with trees at the side and smaller shrubs dotted around in the middle. It drops straight onto a regular run leading back to the chair, so it's easily lapped. Like most controlled off-piste areas, moguls form quickly after a good snowfall. 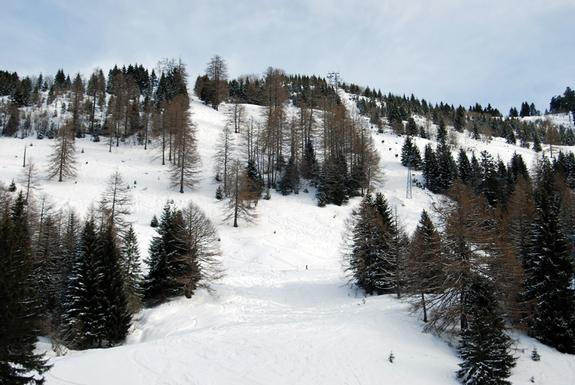 Freestylers don't flock to this resort as they do to others in the Portes Du Soleil. Torgon doesn't have it's own park, nor is it known for an abundance of natural hits. There is a pretty good park in Super Chatel: the Smooth Park. Although Super Chatel is joined with Torgon by lifts, it still takes a bit of time to get there. If you don't have a full pass for the Portes Du Soleil, the cut-down, 'Evasion' pass covers Chatel.

Piste lovers may be put off by the number of T-bars in this area, but if you can look past that, there are some good groomers. Most of the selection are wide and flat, with the advantage of low slope traffic, which keeps afternoon moguls at bay, unlike busier parts of the Portes Du Soleil. If you like fast, the red run, Djeu des Tetes is perfect.

There are 3 lift pass options in Torgon: a full area pass, the Evasion pass, covering Torgon, Châtel, La Chapelle d'Abondance, Morgins and Champoussin, and the local pass for Torgon and La Chapelle d'Abondance only, which includes the lifts running up to Cret Beni and La Combe. If you're looking to spread out a little, the Evasion pass may be more realistic than the full area pass. When moving between Swiss and French slopes you're supposed to have your passport or identity card with you.

Exploring the rest of the Portes Du Soleil from Torgon isn't particularly easy. It's around 2 hours from the base to reach the Avoriaz area, that's heading down into Chatel to get a bus to Pre La Joux. An advanced rider may be able to make it Les Crosets using the slopes in around the same time. Remember to leave enough time to get back.

Beginners may find it difficult exploring to new runs and places from Torgon as the surrounding pistes are all either blue or red and they make heavy use of drag lifts. Even access from the first lift is difficult. To move away it's a blue (trail) and the home run is red.

There are however some really nice beginner runs between Torgon and Chapelle. The greens around Col de Braitaz Conche are wide, flat and quiet. They also offer trees and beautiful scenery; but again, getting there and back for a fresh beginner isn't easy.